A SAVING IN HEATING COSTS WILL BEGIN WITH CLEAN PIPES!

Irrespective of the way of getting thermal energy (gas, district heating, etc) or the fact whether a single or double pipe system is being used, heat is mostly transferred via common consumer water or chemically treated water. Since various metals are used in the heating system (sheet metal/cast iron – radiators, steel – pipeline, copper – heat exchanger), sediment forms as a result of electrochemical corrosion (various metals reacting mutually) when using both the waters, depositing unevenly in the pipeline, radiators and heat exchangers. It’s a sticky blackish mass forming an insulating layer in the system, heating through which will increase heating costs considerably. Also the power consumption of the circulation pump of the heating system will increase, since there’s higher resistance in the system. For instance, in the case of a 6,000 m2 building, the circulation pump can cause extra power costs of up to 60 euros per month.Also clogging temperature controllers are a major issue. 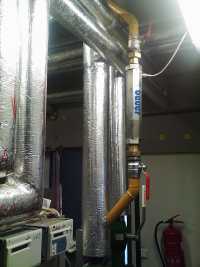 Already in 3-5 year old systems (and what could be going on in even older systems!) clogging in the pipelines, heat exchangers and radiators occurs (often a mere ¼ of the surface area of a radiator will become hot). Thereby the water in circulation itself may be transparent and seem clean – yet that is misleading, since sediment has deposited in the pipes, radiators, heat exchangers, etc. The situation in ventilation heating circuits is especially poor. There the aforementioned sediment will form in abundance.

The most efficient and modern solution to these problems is electromagnetic water treatment based on Bauer technology affecting minerals solved in the water, preventing the formation of scale and corrosion. After the installation of the device no soot will deposit in the pipes, radiators, heat exchangers or on any other surfaces in contact with water.

Sediment formed earlier will start softening and coming off the surface as a result of the treatment. As a result of the treatment, both the radiators and any other parts of the heating system will become clean, the load on the circulation pump will decrease and the system will be balanced. In addition to the Bauer electromagnetic device, a special filter separating the aforementioned sediment from water will be installed in the heating circuit. Regular time for the filling of the filter after the installation of the Bauer device is 3-4 months. Once the system is cleaned, one filter element per heating period will be enough. At the same time, there are exceptions, for example, two filter elements were filled in the first four days in the heating system of a 5 year old hotel in the city centre of Tallinn. 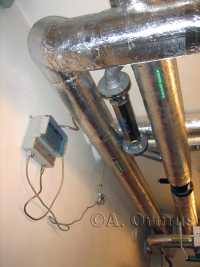 As far as we know, a layer of sediment of 0.2 mm will cut down the efficiency of a heat exchanger by up to 40%! For the efficient transmission of thermal energy, it’s necessary to keep the heat exchanger clean. The flushing of the heating system with chemicals will cut down the lifespan of a heat exchanger. Using Bauer technology, there’s no need to flush the heating system any more. The Bauer electromagnetic water treatment device will clean the radiators, heat exchangers and pipeline from sediment formed as a result of electrochemical corrosion, thus enabling a major cut down in the heating and maintenance costs for the owner of the building, whereas:

Finnish Talokeskus OY conducted a survey during which the heating costs of 100 buildings before and after the installation of the Bauer device were monitored. It became evident from the survey that after the installation of the Bauer device (system cleaning) the heating costs had dropped by 4-21%. Some monitoring has been performed also in Estonia. For instance, a hotel in the city centre of Tallinn saved 20,870 euros in one winter and the investment in all the heating circuits was 17,800 euros. Thus the investment paid off in one winter as yet.